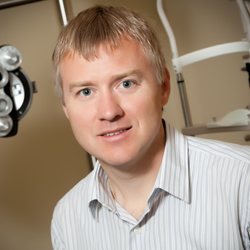 Doctor Joel Westrum was born and raised on a farm near Stratford, Iowa. Joel attended the University of Iowa and graduated from InterAmerican University in San Juan Puerto Rico with a doctorate in Optometry in 2005. After graduating from optometry school, Joel returned to Iowa and worked for the Wolfe Clinic. Joel and his wife Karime opened Westrum Optometry in September of 2006.

Joel and Karime, along with their daughter, Helena, enjoy living in the Gray’s Lake neighborhood. Both of their extended families live in central Iowa. Joel enjoys traveling and recently visited Haiti. There, he was able to provide much-needed eye care and donated glasses to the underserved Haitian population.

Joel takes great pride in serving his diverse patients in the East Village. He is fluent in English and Spanish. Joel welcomes persons of all backgrounds.

Please fill out the forms below before your appointment.